General Description: The USS Texas was commissioned in 1914 as a New York class battleship.  The Texas saw action soon after commissioning in Mexican waters following the Tampico Incident and in several sorties in the North Sea.  Early in World War II the Texas was tasked with convoy duty across the Atlantic.  It was also part of the task force that shelled the beaches for the North African campaign and Normandy Invasion.  In 1944 it was transferred to the Pacific where it participated in the Battles of Iwo Jima and Okinawa.  The USS Texas was decommissioned in 1948 having earned a total of five battle stars for service during World War II.  Today it is a floating museum ship near Houston, Texas and is notable for being the only surviving World War I era dreadnought battleship.

1) Unfortunately, the Battleship Texas is currently undergoing extensive repairs and was closed to the public while we were there.  We got some nice photographs of the battleship from the shore, but nothing else. 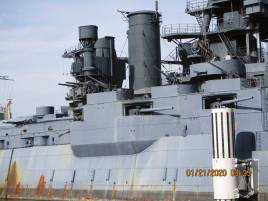