General Description: In 1978, Paul Barron and Eddie Bufkin were searching for arrowheads and fossils near the Bosque River when they found a large bone sticking out of the bank of a dry creek.  Having been exposed to the importance of reporting finds during their years as Boy Scouts, they took the bone to the Strecker Museum at nearby Baylor University for analysis.  The bone was identified as a Columbian mammoth and the museum staff immediately organized a formal dig at the site.  Between 1978 and 1990 the remains of 16 Columbian mammoths were discovered.  Most notably their efforts uncovered a nursery herd that appears to have died in a single event.  Between 1990 and 1997 an additional six mammoths were excavated including a large bull.  They have also found the remains of a Western camel, dwarf antelope, American alligator, giant tortoise, and the tooth of a saber tooth tiger.  While initially the find was dated 40,000 years old, recent research of the soils indicate an age of 65,000 to 72,000 years.  It is believed that the nursery herd of at least 19 mammoths were trapped during a flash flood of the Bosque River and subsequent floods buried the bodies.  While the early finds were encased in plaster and are now stored at the Mayborn Museum Complex at Baylor, most of the later finds have remained on site and are on view by the public.  Today they are protected by a metal building that maintains a constant temperature and humidity shielding the remains from the weather.  Tours by NPS staff and volunteers are conducted throughout the day.  The Waco Mammoth National Monument is one of the newest units in the NPS, being added in 2015 by President Obama.

1) The Waco Mammoth National Monument is a small unit of the NPS covering just 100 acres on the outskirts of Waco, Texas.  Although there is a small Visitor Center on the site, it serves primarily as a Gift store and ticket sales for the tours. 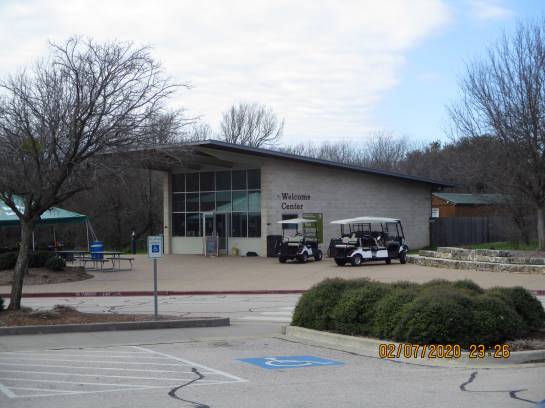 2) Tours are every half hour through the day and last about 45 minutes.  Our tour guide was a retired history professor and thus was very good at telling the story of the discovery of the fossils, as well as, what is known about the Columbian mammoth, which is very different from the Wooly mammoth although they existed during the same time periods.  The Columbian mammoth was not adapted to the cold northern climates during the Ice Age.  Instead they were adapted to the savannas of the southern US and extended down into South America.

3) The highlight of the tour is the location of the bones that are still in the ground.  It is fascinating to see the bones, in situ, instead of in a display case.  While our time within the building with the bones was relatively short, I could have spent a lot more time there. 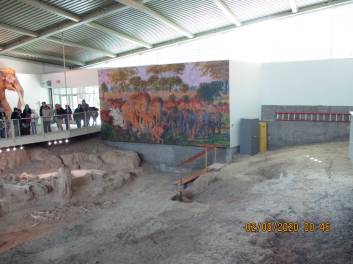 4) There is also a half mile nature trail through the hardwood thicket surrounding the site.