By traveling on Monday we were once again back to our normal routine after the past month and a half.  We pulled the RV west into Mississippi for a couple of hours to Roosevelt State Park which is about halfway between Meridian and Jackson, Mississippi.  The real advantage for us was that the interstate is literally on the southern edge of the state park.  So within a mile of pulling off the interstate and we were in the state park.  Of course it was another two miles of winding narrow roads to get around to the other side of the lake to the RV campgrounds.  I had reserved a site on a corner of one of the two loops which gave us a great view of the lake with the swimming beach between us and the water.  It was also a short walk to the bathroom and since most of the sites were full hookups, we were set for the week.  The truck has done a great job so far in pulling the RV and once again gave us no problems on the trip.  This was also my first opportunity to back the RV into a site.  With the parking lot for the beach directly across from the site, I had plenty of room to swing the truck around.  While I am not positive, it seems this truck swings faster than the King Ranch.  I wonder if the turning radius is a little bit tighter.  I should also mention that with the big RV behind the truck, the backup cameras are no help.  I would still like to look into getting a camera attached to the back of the RV since the truck is supposed to be able to access an auxiliary camera to see if this view would be useful.  In any case, we were able to quickly get set up for the week. 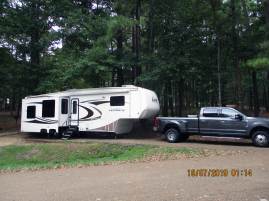 Now that the cold front had broken the summer like weather, Tuesday was going to be one of the coolest days during the week.  So I got into the truck and went to check out the disc golf course in the state park.  This is a very well designed course, that is not being maintained.  While I was able to find all the cages, about a third of the tee boxes are missing and nearly all the signs giving fairway number and distance were either missing or on the ground.  They did have benches at most of the tee boxes, so I am fairly sure I was at the right place for each tee shot.  Nearly all of the holes were fairly short, only 200=250 feet, but since there were trees EVERYWHERE, this made little difference.  It was impossible for me to throw the disc without hitting at least one tree.  The first open fairway along a powerline on the side of a creek was especially disastrous.  Finally, I could let loose with my shot and promptly throw it much to high and it disappeared into the brush on the side of the fairway!  After 15 minutes of searching I did finally locate the disc hidden behind a log so you could not see it from the edge of the fairway.  I had to go beating around in the undergrowth in order to find it.  Along with all the trees, they also used fingers of the lake to through across and even one fairway that crossed a stream twice.  Like I said, the course was well designed with a lot of technical hazards.  I was doing okay until hole 10 which went diagonally up the side of the dam on the lake.  Not only did I have to throw up the slope, but any altitude on the disc caused it to curve to the left which meant it was going back downhill.  After a tee shot that got me nowhere up the face of the dam, I was now faced with going directly uphill.  The climb up to the top of the dam was almost more than my hip could take.   However, from this point on it was back downhill into the trees again.  I enjoyed the course and had a good time on a beautiful fall day.

Wednesday and Thursday we just spent in the campground as I was having trouble getting Kal interested in doing any hiking or just about anything else.  I am going to have to work on getting her back into the swing of this lifestyle.  We have been sitting in the campgrounds a lot over the past month.  Hopefully, as we get into areas of the country we have not seen, this will change.  By Friday the weather had turned wet again so we headed northeast to Philadelphia, Mississippi and the Silver Star Casino that we have been two a few times in the past, most recently in 2017.  While I had a reasonably good day at the slot machines, Kal lost everything and did not enjoy herself.

The weekend was again spent relaxing in the campground and working on this blog.