The trip from Birmingham to Jackson was another long pull for us being over 4 hours in length.  However, the entire trip was along Interstate 20 so there were plenty of rest areas to break up the trip.  We pulled into Springridge Mobile Home Estate and RV Park in the middle of the afternoon to a surprise as we were followed by two police cars.  Once it was obvious they were not looking for us, as they immediately went into the office, we decided to stay out of the way until they were finished.  It turned out there was an erroneous call to 911 from a long term resident who saw things when he was not on his meds.  This is one of the reasons we prefer to stay in state parks and federal campgrounds where all the campers are not living there.  This was our first time staying in a mobile home park so near a large city like Jackson, Mississippi and I will avoid it in the future.  The RV part of the estates was nice, if you like staying in an asphalt parking lot.  At least they had bushes in planters between the sites, but even then each site was barely wide enough for the RV.  At least it was a pull-through site with full hookups that was reasonably level.  The bathrooms were nice and clean, once you got into them.  There was a keypad requiring a three step process to unlock the door.  First you had to “wake-up” the keypad by completely covering the device.  Then you had to hit the randomly lit numbers to wake up the entire keypad.  Only then could you enter the 4 digit code and the unlock button to get into the bathroom!!  There are instructions posted outside the door, but frankly they did not make any sense until you got lucky and figured out the sequence the first time.  I was ready to give up the first time before I got lucky and it was not until the next time that I finally figured out the sequence of events!!  In any case, we choose the location due to its proximity to the Natchez Trace Parkway that was our focus for the week.  It was also very close to stores and restaurants which was a plus, although the proximity of I-20 was a constant roar outside the RV. 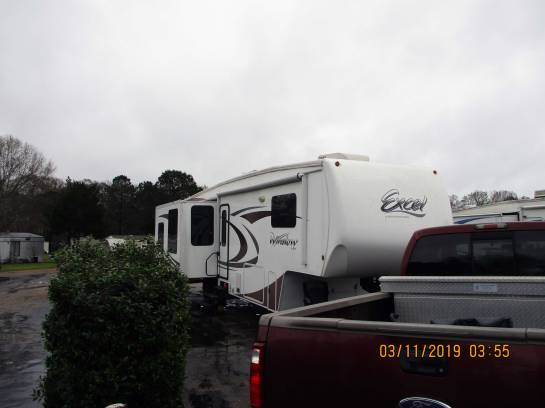 The weather on Tuesday was nice and cool so we headed north to pick up where we left off from the Natchez Trace Parkway two years ago.  Back two years ago we had traveled the northern half of the parkway from south of Tupelo to the terminus in Nashville.  We traveled north from Jackson to where we left off about 70 miles which is halfway to Tupelo.  As we discovered two years ago, the parkway is a GREAT way to see the state and every state should have one.  It is a limited access highway with no commercial vehicles (large trucks) and literally no traffic.  Since it is limited access there are no billboards, businesses, or houses along the road.  It is just you and nature.  You travel along looking at the woods with stops every few miles for a short walk or reading a sign about the history along the trace.  It is a great way to spend a beautiful winter day and we were looking forward to it after the busy two weeks in Birmingham.  We started out walking a short trail that wound up from Hurricane Creek into the upland pine forest with interpretive signs about the changing habitats.  From there it was a leisurely trip back south to Jackson.  There were other short walks through the woods and long the edge of a cypress/tupelo swamp and a very nice overlook of the reservoir on the Pearl River.  Many of the stops were just a single sign about a stand along the trace that served as inns and taverns for travelers back in the very early 1800s.  We also learned about the Choctaw Indians that lived there at the time and saw the oldest Indian mound in the region.  While they parkway does not exactly follow the old Natchez Trace as it winds around, there were a couple of stops where you could see evidence of the old trace, especially when it created a sunken road that is still there today. 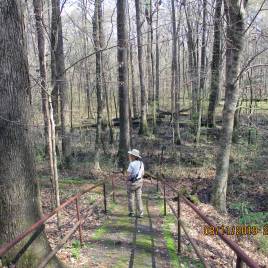 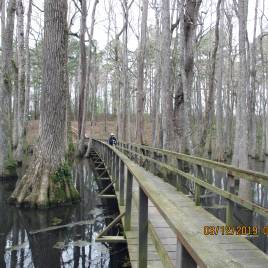 The weather on Wednesday was supposed to be rain, although it did not happen until after dark.  Believing it was going to be bad weather, we decided to postpone our exploration of the Natchez Trace and headed west to a casino on the Mississippi River in Vicksburg, Riverwalk Casino.  As this was about halfway between Auburn and College Station in Texas when William was in college, we had stopped multiple times to take a break in the trip at one of the casinos.  Therefore, we opted this time to visit one further from the Interstate that we had not visited before.  Riverwalk is a smaller casino then Ameristar and the other casinos in Vicksburg, but still offered all we were looking for.  After over 2 hours of playing, I managed to score some big pay offs before Kal lost her money, so we came out just a few dollars short of where we started.

On Thursday it did storm, so we stayed close to the RV.  This was also the second day of SEC Basketball tournament, which was Auburn’s first game against Missouri.  Especially since we were only 5 minutes from an Applebee’s we headed over there to watch the game.  Auburn played very well and won so we planned on repeating the experience on Friday.

Friday was cooler then I like, however, the weather was clear so we started off the day by continuing our exploration of the Natchez Trace Parkway.  This time we traveled south along the Trace to a point about halfway to Natchez before turning around and hitting all the stops on our way north.  Our first stop of the day was therefore at the best example of the sunken trace along the parkway.  A short trail takes you down into the trace which you can then walk up with walls soaring over 20 feet above you.   It was an amazing experience.  The next stop was the Grindstone Ford where the trace crossed the Bayou Pierre.  The Bayou Pierre is a massive wetlands of interlacing streams and swamps that marked the “end of civilization” for the Kentuks traveling north after selling their goods and raft at Natchez.  The path is along a slightly sunken trace to the area of the ford, which is no longer identifiable, if it ever really was.  The trail simply degenerates into the wetlands.  Also at this location is another Indian Mound, Mangum Mound, that dates back to the Mississippian culture.  For lunch we ate at the location of the lost town of Rocky Springs that grew into a thriving farming town due to the trace and the presence of the spring.  The lowering water table has dried up the spring and the town had also disappeared.  It lasted until after the Civil War, which devastated this region in 1863 with the Vicksburg Campaign that was followed by a yellow fever outbreak and the devastation caused by the boll weevil on the cotton crops.  It was difficult to figure out where the buildings of the town original were due to the severe erosion in the area from poor farming practices.  Along with the usual stops for old stands and shifting boundaries of the Choctaw Nation as it shrunk over time, the other notable stop was the Battle of Raymond, which occurred in April of 1863 as part of Grant’s Vicksburg Campaign.  After attempting to capture Vicksburg from the north and east, Grant changed his strategy to travel south through Louisiana, crossing the Mississippi River south of Vicksburg and swing back to the northeast.  Raymond was the last of a series of small battles against the Confederates as he moved northeast through Mississippi, paralleling much of the old trace.  Raymond was the closest battle to the trace and following this victory, Grant decided he need to remove the Confederate threat in Jackson before continuing to Vicksburg.  We will certainly find out much more when we visit the Vicksburg National Military Park later. 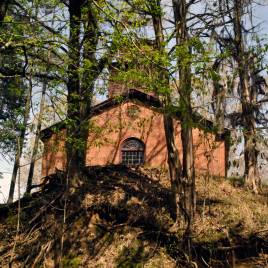 Since we only explored 45 miles of the parkway, we were done in plenty of time to catch the next Auburn game at Applebees against South Carolina.  Once again we played very well and won the game, so it looks like there will be another trip to Applebees for the next game on Saturday.

Originally our plans were to visit Vicksburg on Saturday, however, we decided to postpone this trip for a couple of weeks so we could catch the next basketball game.  Instead we did laundry and cleaned the RV before heading to Applebees to watch Auburn take on Florida, who had upset LSU on Friday.  This upset must have taken a lot out of Florida, as we easily beat them to put us into the finals.  Tennessee also upset Kentucky on Saturday, so we would meet them in the finals.

Sunday was all about basketball as Auburn had reached the SEC finals for the first time in a very long time.  Our opponent was Tennessee, who we had just beaten in the last game of the regular season on senior night in Auburn.  Tennessee had also just beaten Kentucky, so we hoped they would be as worn out as I know Auburn was after three games in three days.  For the fourth day in a row we found our favorite seats at the bar in Applebees and enjoyed another VERY good game.  Auburn beat Tennessee and won the SEC tournament!!  We went back to the RV to catch the NCAA bracket show to see if it made any difference in Auburn’s seeding.  Before the SEC tournament, Auburn was expected to get a 5 seed and that is exactly what they got.  Their first game would be against New Mexico State early in the afternoon on Thursday.  I sure hope there is an Applebee’s close to where we will be staying near Natchez next week.