General Description: Amnicon Falls is the result of the Douglas Fault, which underlies much of Lake Superior.  An earthquake about half a billion years ago opened up the underlying basalt formation from past volcanic events from the red sandstone deposited by ancient oceans.  From the upper falls to the lower falls you can view the change in the formations due to erosion.  The location is known as the best place to study these rock formations.  Human occupation began with the ancient Native Americans who hunted mastodons as the glaciers retreated 9000 years ago.  More modern Native Americans lived along the Amnicon River known as the Old Copper Culture harvesting outcroppings of copper in the area.  At the time of western settlers, the Ojibwa Native Americans lived and hunted in the area.  Up until the Treaty of 1842 when the land was acquired from the Indians, the only westerners were fur trappers catching mink, otter, and beaver along the shores of Lake Superior.  By the 1850s copper miners moved into the area searching the many outcroppings for lucrative sources of copper, with limited success.  By the 1890s, timber companies moved in, constructed railroads, and began harvesting the huge timber resource in the area.  Sandstone was also quarried from pits near Lake Superior and the Apostle Islands where they could be easily transported on barges.  In 1932, Douglas County purchased the land around the falls on the Amnicon River, which in 1961 became Amincon Falls State Park.

1) While the falls would be better named cascades, as the greatest fall is only about 10 feet, it is still a beautiful run of the river over the basalt rocks cutting through the red sandstone.  There is a nice trail that runs along both sides of the river from the lower falls to the upper falls and back.  There are numerous vantage points were you can view the many cascades on the river, even two places where the river splits creating islands. 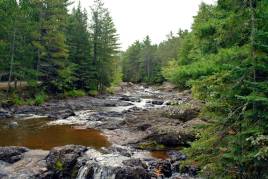 2) The Thimbleberry Nature Trail is a mile long loop trail through the northwoods and along the Amnicon River below the falls.  There are numerous interpretive signs about the trees and plants to be found along the trail.