General Description: The Native American mound complex at Toltec Mounds is the largest and most complex mound site in the state.  Archeological research has determined that the site was primarily a ceremonial ground for the surrounding Indian farming communities.  There is little evidence of houses within the complex.  Mrs. Gilbert Knapp, who owned the property from 1857 to 1900, named the complex of mounds Toltec, after the Mexican Toltec Indians who she believed constructed this site as well.  We now know this to be incorrect, although the name has stuck.  The culture is named “Plum Bayou” after a local stream and was similar to other contemporary Native American cultures in the Mississippi Valley.  The center was inhabited from 650 to 1050 A.D. and consists of primarily religious and cultural structures.  Originally the complex consisted of 18 mounds next to a natural ox-bow lake, Mound Lake, a few miles from the Arkansas River.  The mounds were surrounded by an earthen wall that is believed to have been about 10 feet high on the three sides away from the lake.  The mounds were placed along the edge of two leveled plazas.  The larger mounds were believed to have been placed to align with celestial events including the summer and winter solstice when viewed from a central wooden post ring.  Most of the mounds are flat-topped and likely had structures on top, only one of which was a rounded burial mound.  Today most of the mounds have been lost due to erosion and agriculture, although all 18 mounds have been located and their positions marked with sign posts.  Only 5 mounds are still visible today, the largest being Mounds A and B, which are 49 and 38 feet tall, respectively.

1) There is a very nice Visitor Center at the park, which is a great place to start your exploration of the mound complex.  There is a very nice video about Toltec Mounds that puts it into perspective with other Native American mound sites along the Mississippi Valley.  There are also a number of nice exhibits about the Plum Bayou culture with a LOT of artifacts.

2) There are two trail systems that visit the site.  The 3/4 mile Knapp Trail is a paved trail that takes visitors out and around Mound A with a number of informative stops along the way.  The Plum Bayou Trail is 1.6 miles in length and takes visitors all the way around the perimeter of the site, as well as, crisscrossing the Knapp Trail for views of all the existing mounds.  I recommend the Plum Bayou Trail since it provides a much more detailed look at the site.  There are trail brochures for each trail in the Visitor Center that gives detailed information at a series of numbered stops along the trails.

3) Be sure to visit the Plum Bayou Garden near the Visitor Center where you can see plantings of the native plants used and cultivated by the Plum Bayou culture.  The plants are all identified, although I would suggest visiting in mid to late summer, as most of the plants were not yet visible in the early spring when we visited. 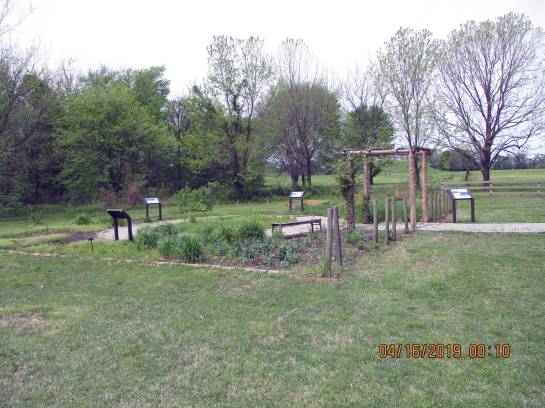